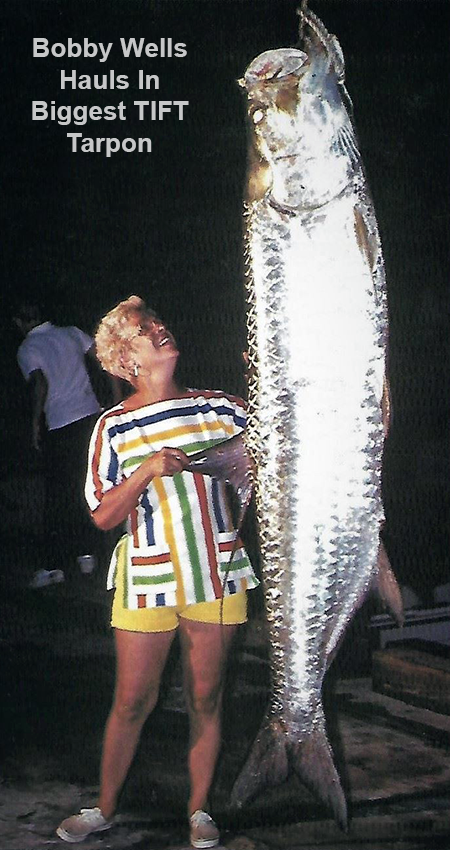 To commemorate the historic influence of the Texas International Fishing Tournament, we’re sitting down with some of TIFT’s most loyal participants and reminiscing about some of their most cherished memories, along with how the event has evolved since it’s commencement in 1934.

Barbara “Bobby” Wells is well known for her involvement in the tournament and the fishing community, seeing how she has attended every TIFT since the first annual. Ask her about it during any time of the year and Wells will confidently say, “TIFT is one of my favorite things to do.”

At first, it was all about entertaining her sons, who were two years old when Wells first registered them to fish TIFT in 1951 (we think). That year was an important milestone for the boys, but also for Wells’ husband, who won Grand Champion that same year.

Evidently, the event proved to serve as more than entertainment for the community. TIFT was the salvation of Port Isabel during a time when the city really needed some activity. Nobody really knew about our little coastal town, and even if they did, had no big reason to come visit. For Wells’ and her family, the
tournament brought fun as well as financial prosperity. “We supplied the baits for many, many years. The tournament itself lasted for 5 days and we all looked forward to making a buck off it, a buck we really needed.”

Above all else, Wells’ appreciates the camaraderie of the event. “Everybody that was involved with it for the beginning, stayed involved. Everyone got to get to know each other outside in the community by being involved in this annual event. I’d fish alongside all of the other tarpon fishermen and I got to know these people because we supported each other out on the water.”

“When they built the first causeway, they dug a hole to get the dirt for construction. It was a nice, deep hole and the tarpon loved it because mullet would get caught in there. One day I was fishing the tarpon hole alongside a gentleman named Warren Freeze. Him and everyone else were ecstatic when
his line tightened and he began reeling in what seemed like a big fish. It wasn’t long before I watch the hooked tarpon fly up into the air and land right inside Warren’s boat. He frantically sat on this fish to keep it from leaping again!” With a smirk, Wells’ continued, “Within the hour, I caught a tarpon that was just a little bit bigger. So, I ended up getting the trophy anyway.” (Without having to sit on her fish.)

As the tournament progressed, participants began to realize that the trophies they won would become important monuments in history. “We figured we better start taking better care of these trophies. We had no idea how valuable these things were going to become and how long the tournament would last.”

Back to
Top
< Back
X